The Game of Life 2 brings modern choices to a classic title, updating gameplay for a whole new audience, while maintaining the heart of the original

Xbox One and Xbox Series X|S players can join their friends and family on mobile, PC, Nintendo Switch, and PlayStation

After topping the charts on multiple platforms, winning the Pocket Gamer Award for Best Board Game, and delighting fans around the world, The Game of Life 2 has arrived on Xbox One and Xbox Series X|S consoles.

The Game of Life 2 follows Hasbro’s classic and beloved board game, The Game Of Life, played by millions of friends and families in over 50 countries around the world, and it’s received over 345 million views on YouTube and Twitch.

The Game of Life 2 is a contemporary take on the classic board game with modern choices and a more modern gameplay structure. Just like the original, players hop in their chosen car, spin the spinner and set off on their life journey, encountering choices as they move through life. However, thanks to an added Crossroad moment later in the game, players have more chances to make important decisions.

In The Game of Life 2, players can save marriage and college, house buying, and pet adoption, for later in the game. Vitally, players now earn points for choices that improve Knowledge and Happiness, as well as Wealth, giving them the opportunity to strive for a balanced lifestyle! What’s more, instead of reaching the end of the road and automatically ending the game in retirement, players can choose to continue their journey and fulfill their bucket list!

With a bright, fun, fully animated Classic City world PLUS the best-selling Fairytale Kingdom and Haunted Hills worlds INCLUDED with the base game, The Game of Life 2 provides hours of fun for the whole family.

Michael Willis, CO-CEO of Marmalade Game Studio, said: “When creating an adaptation of an original game it’s important to appeal to both new and established players, and The Game of Life 2 has seen extraordinary success with fans around the world. Launching the game on Xbox One and Xbox Series X|S is an exciting next step, allowing more friends and families to connect through this classic title. We love it, the fans love it, and we can’t wait for you to play it.”

The Game of Life 2 is just one of Marmalade Game Studio’s roster of high-quality adaptations of beloved Hasbro board games, including Monopoly, Clue/Cluedo, Battleship, and the original The Game of Life.

Hasbro is a global branded entertainment leader whose mission is to entertain and connect generations of fans through the wonder of storytelling and exhilaration of play. Hasbro delivers engaging brand experiences for global audiences through gaming, consumer products and entertainment, with a portfolio of iconic brands including MAGIC: THE GATHERING, DUNGEONS & DRAGONS, Hasbro Gaming, NERF, TRANSFORMERS, PLAY-DOH and PEPPA PIG, as well as premier partner brands.

Hasbro is guided by our Purpose to create joy and community for all people around the world, one game, one toy, one story at a time. For more than a decade, Hasbro has been consistently recognized for its corporate citizenship, including being named one of the 100 Best Corporate Citizens by 3BL Media, one of the World’s Most Ethical Companies by Ethisphere Institute and one of the 50 Most Community-Minded Companies in the U.S. by the Civic 50. For more information, visit www.corporate.hasbro.com.

Take part in The Game of Life 2 Big Under the Sea Quiz, and win BIG PRIZES!

Why Cross-Platform Games Are Taking Over
Next Article 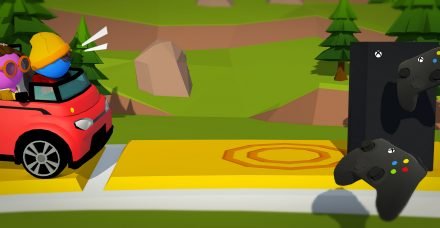