To celebrate the London Games Festival, we’re inviting you to step back in time. Get your friends together on mobile and visit the London of Queen Victoria in two iconic board games. Roll the dice and become a property tycoon in the sparkling Monopoly Victorian London theme (on iOS and Android), then polish your magnifying glass and be the great detective in Cluedo’s Sherlock (also on iOS and Android)!

Own the Themes Forever and Save 50%

This exclusive in-game event goes further than temporary access to two themes. Continue the magic on your mobile and own them forever, for less, with the London Games Festival Sale! Buy Victorian London and Sherlock, or own every theme in the Monopoly Season Pass and Cluedo Detective Pass, half price.

A Sparkling New  Monopoly Board

Every Monopoly theme comes with its own special set of tokens. Leave the Scottie Dog, Battleship and Top Hat behind and this time play as the Crown, Royal Guard, Lion or Big Ben! Set off into the chilly London streets to buy and sell your way to riches on iOS and Android. You’ll be racing your family and friends past Tower Bridge and St Paul’s Cathedral, over the frozen Thames and back around to Go!

In a London where Sherlock Holmes and Professor Moriarty are intellectually testing one another, Dr. Black wanted to knock those giants off their pedestals! He made a bold move that ended in his demise, but who’s responsible?

Every Cluedo theme comes with its own selection of characters, and the Sherlock theme boasts the largest cast of them all! Play on iOS and Android as your favourite Holmesian heroes, including Sherlock Holmes, Dr. Watson, Professor Moriarty, and Irene Adler, or stick with reimagined Cluedo classics: Suffragette Scarlet, Nurse Peach, Organ Grinder Peacock, Policeman Plum and Docker Rusty.
Make the most of this limited time offer! Enjoy both themes FREE until April 10th, and own them forever for half the price! 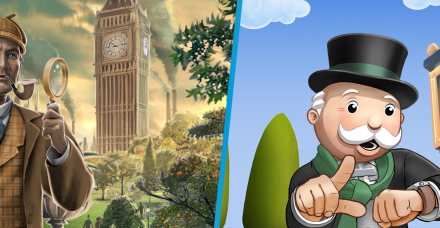