After 26 years the Jumanji board game, based on the classic from the 1995 film, has come to mobile. JUMANJI: The Curse Returns, is a new casual co-op board game adventure from Marmalade Game Studio, launching on Android and iOS today.

Based on the 1995 film, this thrilling board game takes you to iconic sets throughout the town of Brantford. You’ll be rolling the dice, reading the riddles and fighting dangers from the mysterious jungle together. Classic board and card game mechanics really bring the experience to life. Your team will face multiple threats in every round, including mosquitos, and even the hunter Van Pelt.

With every roll of the dice, you risk letting more of the jungle out of the board. Stand your ground. If you lose all locations to the game, you’ll lose the town! Gameplay combines the classic board game with a card-matching, time attack mechanic. Enjoy simple and varied rounds of co-op fun. Work together to earn bonuses, collect jewels, and get one of your team to the center of the board to win.

Following their Steam release earlier this year, Marmalade is bringing exciting new features and content to JUMANJI: The Curse Returns, with the mobile release. These include a Winter Map for later this year, and new magical items to be used in every round. The Winter Lodge Resort update will bring with it FIVE new locations, TWO new characters, TWO new tokens and ONE brand new riddle to keep the excitement going!

JUMANJI: The Curse Returns is a game for four players, and if you have fewer than four on your team, AI players will make up the numbers. In single player mode you’ll battle the jungle with three AI characters. With private online co-op, you can join your friends and family to vanquish Jumanji together.

“Bringing the Jumanji board game to life, based on the classic from the 1995 film, has been hugely fun and challenging. As fans will know, the magic of the Jumanji jungle doesn’t stay within the board, it escapes and tries to stop the players from completing the game. We decided to stay faithful to this experience, combining multiple game mechanics in one. We can’t wait for you to team-up and play JUMANJI: The Curse Returns on mobile. It really is classic multiplayer fun for every type of player.”

JUMANJI: The Curse Returns is a premium title available for pre-order now on the Apple App Store and Google Play store, priced at £2.49 / $2.99 / €2.99. The game launches on both platforms on 17th November.

About Jumanji: The Curse Returns

Roll the dice, read the riddles and the Jumanji board game will summon a mysterious jungle to take over the town! You’ll team-up with your friends and family to banish jungle creatures and plants together. Work within the time limit in every round and reach the center of the board to win. Face crocodiles, elephants and rhinos, rescue your friends from vines and dodge the hunter, Van Pelt!

Match the items from your stash to every danger and send the animals and insects back into the board. Work together, have fun, and stop Jumanji from invading the town!

London-based Marmalade Game Studio is one of the most successful publishers in the digital board games markets on Steam, Nintendo Switch and mobile. Notable successes include MONOPOLY, THE GAME OF LIFE 2 and CLUE/CLUEDO, all highly polished and innovative games that constantly top the charts on the App Store and Google Play. For more information about Marmalade Game Studio, please visit the website: https://marmaladegamestudio.com/, and follow us on Twitter (@MarmaladeGames), Facebook (@MarmaladeGameStudio), and Instagram (@MarmaladeGames)

Are you an original Jumanji fan? Win a copy of JUMANJI: The Curse Returns!
Next Article 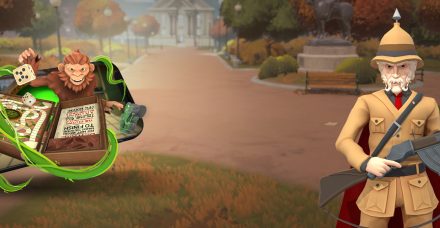