Celebrate this major update with a 75% saving on the App Store and Google Play, offer ends 3rd April

Marmalade Game Studio has added a whole new level of card and deck-building tactics to JUMANJI: The Curse Returns in a major update of the mobile board game.

Based on the original 1995 movie, the mobile game sees players living out their fantasy and facing the jungle, rolling dice to guide their tokens around the board, and striving to reach the center before Jumanji takes over.

The introduction of a card gameplay mechanic now brings an added dimension to encounters in the game. Players draw from a selection of ever-changing Attack and Assist cards, during confrontations against the wild animals that players will encounter. Attack cards deal damage to dangers and save teammates from jungle vines, while Assist cards add valuable time during an encounter, help identify a dangers’ weakness or shield and delay attacks. With every encounter, players will earn in-game coins that can be used to add new cards to their deck in the next round. Every encounter brings with it a fast-paced card-based fight, where strategy, deck management and teamwork are key.

JUMANJI: The Curse Returns is a game for up to four players and is perfect to play with friends and family. Gather around the board, roll the dice, read the riddle, and unleash the danger. Teams will face multiple creatures or carnivorous plants from the Jumanji jungle in each round. From elephants to giant mosquitos, crocodiles to monkeys, and even the hunter, Van Pelt, they must banish every danger back into the board, together!

Michael Willis, joint CEO at Marmalade Game Studio, said:“Bringing the Jumanji board game to life, based on the classic 1995 film, has been hugely fun and challenging. The new update adds another level to the experience providing even more multiplayer fun for every type of player.”

There are multiple ways to play JUMANJI: The Curse Returns. Four players are needed to defeat the jungle, but if you have fewer than four on your team, AI players will make up the numbers. In single player mode you’ll battle the jungle with three AI characters. With private online co-op, you can join your friends and family to vanquish Jumanji together. Can you hear the drums?

JUMANJI: The Curse Returns is just one of Marmalade Game Studio’s collection of highly successful digital board game adaptations, including MONOPOLY, CLUE/CLUEDO, THE GAME OF LIFE, THE GAME OF LIFE 2 and BATTLESHIP.

To find out more about the new update visit the Marmalade Game Studio website. Experience Jumanji, brought to life in a co-op adventure board game on mobile – get 75% off on the App Store and Google Play, offer ends 3rd April.

Watch out for new DLCs JUMANJI: Welcome to the Jungle and JUMANJI: The Next Level.

London-based Marmalade Game Studio is one of the most successful publishers in the digital board games markets on Steam, Nintendo Switch and mobile. Notable successes include MONOPOLY, THE GAME OF LIFE 2 and CLUE/CLUEDO, all highly polished and innovative games that constantly top the charts on the App Store and Google Play.

By Popular Demand, The Game of Life 2 is Coming to PlayStation 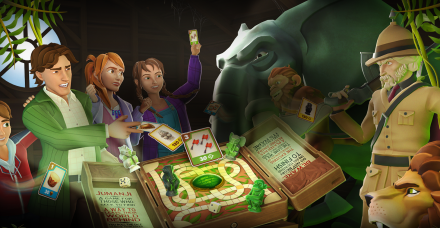