MONOPOLY returns to 1930s Atlantic City on mobile, celebrating the game’s 85th anniversary with a 1930s inspired Atlantic City board

Marmalade Game Studio along with Hasbro Inc. is delighted to announce a brand-new DLC pack for MONOPOLY on iOS and Android adding a vintage, dazzling new board representing Atlantic City in 1935 – the setting of the original MONOPOLY board game. The DLC also includes four classic tokens found in the first edition – the cannon, handbag, rocking horse and lantern.

This special-edition Atlantic City DLC has been brought to life in celebration of MONOPOLY’s 85th anniversary and invites families to experience the nostalgia of the game’s original city. Players will find themselves transported back in time to play among the glamorous boardwalk, lively streets and glittering resorts of 1935’s Atlantic City.

Just before Christmas, Marmalade Game Studio brought the Hasbro family classic to mobile and tablets with its magical adaptation for iOS and Android. The game features a classic mode with the MONOPOLY rules everybody knows and loves, as well as a fast mode for quick games on-the-go. It also offers the option to play with house rules, allowing players to customise the rules and play the game the way they like it. The MONOPOLY game is playable in single player as well as with online and local multiplayer.

Michael Willis, CEO of Marmalade Game Studio, said: “It was delightful to explore the MONOPOLY game’s heritage for the 85th anniversary and allow players to take a trip down memory lane via Boardwalk and New York Avenue in the lavish 30s. We aim to continue to bring the magic of the MONOPOLY board game to mobile devices in new and innovative ways.

Players’ response to the game has been fantastic so far, and we’re looking forward to continuing to enhance it with new content in the future.”

Hasbro (NASDAQ: HAS) is a global play and entertainment company committed to Creating the World’s Best Play Experiences. From toys and games to television, movies, digital gaming and consumer products, Hasbro offers a variety of ways for audiences to experience its iconic brands, including NERF, MY LITTLE PONY, TRANSFORMERS, PLAY-DOH, MONOPOLY, BABY ALIVE,MAGIC: THE GATHERING and POWER RANGERS, as well as premier partner brands. Through its entertainment labels, Allspark Pictures and Allspark Animation, the Company is building its brands globally through great storytelling and content on all screens. Hasbro is committed to making the world a better place for children and their families through corporate social responsibility and philanthropy. Hasbro ranked No. 13 on the 2019 100 Best Corporate Citizens list by CR Magazine and has been named one of the World’s Most Ethical Companies® by Ethisphere Institute for the past eight years. Learn more at www.hasbro.com, and follow us on Twitter (@Hasbro) and Instagram (@Hasbro).

Solve a tropical mystery in the newest CLUE theme

A New Look for Marmalade Game Studio
Next Article 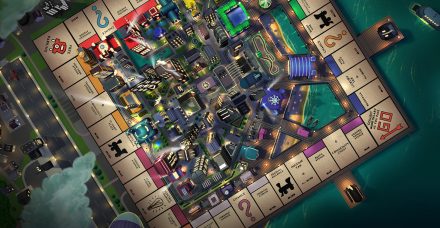