The future is full of excitement and possibility. With the New York 2121 theme, you can explore a world where the lights and sights of the Big Apple are bigger and brighter than ever! Buy, sell and scheme your way to digital riches among soaring skyscrapers and skyrails. Invest in property under the iconic landmarks you love, even if they’re not quite as you remember them. New York 2121 is a playground of possibility just waiting to be bought-up and owned!

Every MONOPOLY theme comes with custom tokens, and each set includes an animal. It’s a time honoured tradition. For New York 2121, the Cyberdog was the obvious choice. It’s your four-legged friend, enhanced to enjoy life in a future world!
The Hover Bike and hovering Taxi are childhood dreams come true. Who needs wheels when you can fly!? There’s no need to worry about potholes when you’re gliding above them all! And for a slice of more traditional travel, never forget the trusty Subway Carriage!

Who stole the Statue of Liberty!?

We don’t know, it happened in the year 2105 and there are plenty of rumours about who committed the crime. It was the heist of the new century, but the plinth couldn’t remain empty. The Hologram Statue of Liberty shines as a beacon of new hope to all those who still uphold her values!
While in the city, why not wander around the Central Park Mall? Yes, retail has crept across what was once one of the biggest inner-city parks in the world. With stretches of open space between airy and bright shopping precincts, the mall is still the greenest place in New York. Get out in the open before pausing under the hologram trees of Fifth Avenue!

Take the Subway or Skyrail!

Fly from one skyscraper to the next with the city Skyrail! With this engineering masterpiece, you won’t ever have to set foot on the ground! Glide from district to district enjoying a spectacular view over the city that never sleeps!

The MONOPOLY New York 2121 theme is a version of the future you can dive into, buying up an unusual board in all the usual ways!

With multiple themes available, including Victorian London, Historic Tokyo, Belle Epoque-era Paris and the classic board, you can crush your friends and bankrupt your family in every time period; past, present and future!

MONOPOLY Strategies - How to win the property trading game

The Family Guide to THE GAME OF LIFE 2!
Next Article 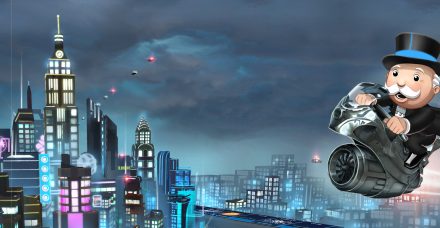