A full-featured family game night experience on the go, out now!

Marmalade Game Studio is excited to announce that their best-selling digital board game, THE GAME OF LIFE 2, has launched on Nintendo SwitchTM today! You can purchase the game in the Nintendo eShop for Nintendo Switch now!

With this launch, Marmalade’s THE GAME OF LIFE 2 brings the iconic life simulation game to a Nintendo platform for the first time in over 13 years. What’s more, when players buy the game on Nintendo Switch they’ll be able to venture through two magical worlds. As well as the Classic World board, players can choose to live life in the Fairytale Kingdom and Haunted Hills!

Marmalade’s sequel has been a bestseller on both mobile and PC. It has been nominated for two 2020 Games Industry Awards, including “Social Game” and “Heritage in Games”, and won Best Digital Board Game in the 2021 Pocket Gamer Awards!

“Since launching on mobile and PC we’ve had countless requests to launch THE GAME OF LIFE 2 on Nintendo Switch. It’s such a great console for portability and accessibility, and with cross platform play we know this launch will mean more people are able to connect through the game. We’re always proud of our work, but we’ve been overwhelmed by the positive reception THE GAME OF LIFE 2 has received, and we can’t wait to share it with a whole new audience.”

With THE GAME OF LIFE 2, Marmalade has introduced a number of well-placed additional choices to better reflect our contemporary lives. For example, players can now win the game with more than just wealth, by collecting points for knowledge and happiness! All decisions count and every life is unique on board where it’s never too late to get that degree, or adopt a mini-van-full of cats!

“Trusting Marmalade Game Studio with developing a sequel to THE GAME OF LIFE wasn’t difficult. They’ve faithfully translated the game so it stays true to the original, while introducing new, fun elements that bring the game to life for the next generation! THE GAME OF LIFE 2 is a new classic, and it’s now on Nintendo Switch.”

Marmalade Game Studio prides itself on connecting players, whether they’re in the same room or hundreds of miles apart. With online and offline options, THE GAME OF LIFE 2 is a safe and easy multiplayer experience. With cross-platform capability, players can now game together via iOS, Android, PC and Nintendo Switch!

THE GAME OF LIFE 2 is the latest in Marmalade Game Studio’s roster of high quality adaptations of beloved Hasbro board games for Nintendo Switch, including: CLUE/CLUEDO and BATTLESHIP.

About THE GAME OF LIFE 2

THE GAME OF LIFE 2 is here on Nintendo Switch! This digital board game is an official, contemporary sequel to the classic THE GAME OF LIFE game. It offers more choices and more freedom every stage of the game on a fully animated and immersive 3D board. You’ve got thousands of meaningful ways to live your life before reaching the finish line.

Hasbro (NASDAQ: HAS) is a global play and entertainment company committed to making the world a better place for all children, fans and families. Hasbro delivers immersive brand experiences for global audiences through consumer products, including toys and games; entertainment through eOne, its independent studio; and gaming, led by the team at Wizards of the Coast, an award-winning developer of tabletop and digital games best known for fantasy franchises MAGIC: THE GATHERING and DUNGEONS & DRAGONS.

The company’s unparalleled portfolio of approximately 1,500 brands includes MAGIC: THE GATHERING, NERF, MY LITTLE PONY, TRANSFORMERS, PLAY-DOH, MONOPOLY, BABY ALIVE, DUNGEONS & DRAGONS, POWER RANGERS, PEPPA PIG and PJ MASKS, as well as premier partner brands. For the past decade, Hasbro has been consistently recognized for its corporate citizenship, including being named one of the 100 Best Corporate Citizens by 3BL Media and one of the World’s Most Ethical Companies by Ethisphere Institute. Important business and brand updates are routinely shared on our Investor Relations website, Newsroom and social channels (@Hasbro on Twitter, Instagram, Facebook and LinkedIn.)

Nintendo Switch is a trademark of Nintendo.

Have your say on the future of MONOPOLY!

Get ready! THE GAME OF LIFE 2 is available now on Nintendo Switch!
Next Article 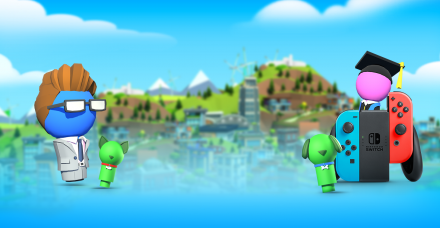