JUMANJI: The Curse Returns brings the 1995 movie to life as a board game and casual co-op adventure for up to 4 players. There’s a mysterious jungle contained within the Jumanji board game and it’s trying to invade the real world!

Every time you roll the dice, Jumanji will send forth wildlife from the jungle to challenge you and your team. It’s up to you to work together and send the threats back into the board before they take over!

Be prepared! You’re not the first to face Jumanji, and one brave explorer recorded their encounters with the native creatures and plants you may face. You can read extracts from their works below.

Adventurers beware: do not begin unless you intend to finish… The exciting consequences of the game will vanish only when a player has reached Jumanji.

The Monkeys of Jumanji are similar to the monkeys of our world, although more prone to seek out opportunities to cause chaos. They are sociable creatures and depending on their mood, they can range from mildly annoying through to downright dangerous. When you hear their chatter, prepare for battle! You want to banish them as quickly as possible!

Commonly called “rhino” (or “rhinos/rhinoceri” – plural), rhinoceri are large animals that enjoy a solitary life. They are highly territorial, and because of their very poor eyesight they are easily surprised. At full speed, a charging rhino can crash through houses with ease. Rhinos are deadly against individuals, but can be confused and overwhelmed by groups. If Jumanji sends a rhino into your world, work together, or your team may never recover!

Jumanji will send a single lion into your world at a time, and that’s plenty. Single male lions are territorial and will see your presence as a threat. Alone, you would be unlikely to survive. As a team you may be able to intimidate it enough to secure a victory. Work together and use everything you can to send it back into the game!

Jumanji flowers are beautiful, but also deadly. The purple variety shoot poisonous barbs. They sense the presence of their victims by feeling pressure on their roots, which grow widely just below the surface of the ground. They are hardy plants and will spread quickly almost anywhere, making them the ideal invading species.

The giant mosquitos native to Jumanji have been inflated by the magic of the game. Attacking animals such as elephants and lions with their tube-like proboscis, they pierce skin and feed on the blood of their victims.
Upon entering our world they bring with them unknown diseases from the jungle. For this reason a single bite can lead to high fevers, rashes and worse. So be careful! If you hear the thrum of their giant wings, get ready to defend yourself!

The flower-like “Pod” plants act like our familiar Venus fly traps. They ensnare their victims with long vine-like tongues and drag them into their colourful jaws. Another fast-growing invasive species, Jumanji is likely to send them into your world as they help provide a better habitat for the animals it will unleash later in the game.

Crocodiles are large semi-aquatic reptiles. They are powerful predators that can be found in freshwater rivers, lakes, wetlands, and sometimes salt water. Crocodiles are carnivorous and will eat anything with a pulse. In Jumanji, they lay in wait in the swamps and rivers, ready to ambush passing creatures.

Any crocodile sent into your world by the game will be angry. Being unexpectedly transported into a different world does not put them at ease. A confrontation with a crocodile will test your team to the limits. Think fast and work together!

The Jumanji elephant is distinct from the three types of elephant found in our world. However, they do share certain characteristics, including their reliance on social groups.

When Jumanji summons an elephant, it will be distressed because it has been separated from its family. As a result it will attack. The kindest thing you can do is attack back and intimidate it until it retreats back into the game. If you lose the round, the elephant will rampage through the town in search of its’ lost friends. Finish the game and the elephant and all creatures will be returned to their jungle home.

Roll the dice and experience the magical board game for yourself. Play NOW on mobile!

Have a White Christmas with Your Favourite Classic Board Games!

Date Night with The Game of Life 2
Next Article 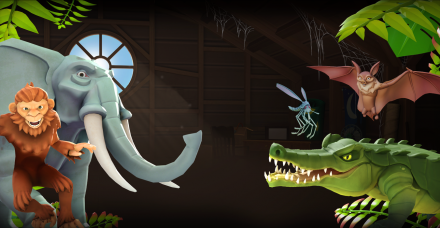