After almost 100 years, the idea of “Community” has changed. New generations don’t know what a “Holiday Fund” was, and “Beauty Contests” are no longer mainstream. For most players, who have only known the post-economic crash world, even bank dividends are like a hangover from a historic golden age.

In a significant international poll promoted by Hasbro and Marmalade, fans of the game suggested new cards, and voted on the top choices. The new 16 cards will be a part of every version of the game going forward, and you can be one of the first to play with them in the mobile game!

The MONOPOLY game has evolved through history. Tokens have come and gone, properties have been renamed, and with almost every evolution, Hasbro has turned to the public to help decide the outcome.
Until now the Community Chest cards have endured with minimal edits. But all that has changed. After 85 years, Hasbro and the public decided it was time to refresh the Community Chest Cards.

Changing the focus from “paying out” to “giving back”, the new Community Chest Cards focus on the good. In this new post-COVID world, it’s no wonder the new deck gives out rewards for helping neighbours and bringing people together, and issues fines for ignoring environmental concerns and failing to improve yourself.

The fans have spoken, and the new outlook is about responsibility and kindness. MONOPOLY has been a household favourite board game for a century, and this move will ensure its relevance for 100 years to come. 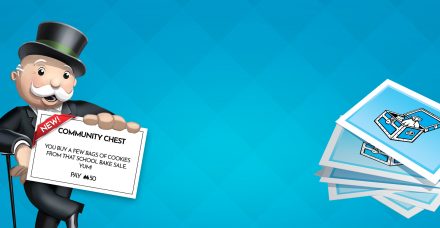