A reinvented iOS and Android sequel to one of the most famous board games of all time.

Marmalade Game Studio and Hasbro Inc are delighted to announce THE GAME OF LIFE 2 – launching on iOS and Android in July and available for preorder now.

THE GAME OF LIFE 2 is a new take on the original family favourite tabletop life simulator. By rethinking the basic outlook of the game, THE GAME OF LIFE 2 seeks to offer new, more relevant and meaningful ways for the player to progress through their in-game life. This includes giving them the chance to forge a path towards happiness, wealth or knowledge.

Marmalade Game Studio has designed THE GAME OF LIFE 2 to reflect the increasingly progressive way that we approach our lives and careers. Working within the familiar game format the sequel makes room for non-linear journeys and the fundamental decisions that are often made later on in life. Quitting your job to become a Video Blogger, or doing a Masters Degree in your 50s are very real possibilities in this new and refreshing take on the classic.

Alongside the updated approach to gameplay, THE GAME OF LIFE 2 offers an array of inclusive options that take steps to ensure anybody can live their best life on the board. In addition to the traditional pink and blue player pegs, historically used to denote gender, a new non-binary purple peg will be available. The fun outfit choices are also universal, so any peg of any colour can be customised in any way.

In developing the sequel, Marmalade has worked hard to give THE GAME OF LIFE 2 an identity of its own, with a beautiful new graphical style and animations. Optional board packs, such as Magical Kingdom (available at launch) will provide an even greater level of escapism, when instead of following familiar careers paths, you can choose from a range of fantastic alternatives!

As with Marmalade’s latest title, MONOPOLY, THE GAME OF LIFE 2 offers a variety of ways to play, both online and offline. Play together on one device, or apart via online multiplayer – a feature which has become invaluable for helping families and friends connect in these challenging times.

Cristina Mereuta, COO of Marmalade Game Studio, said: “THE GAME OF LIFE is a title enjoyed by millions, so we’re really excited to announce the release of THE GAME OF LIFE 2 on mobile and tablets this summer! Since the original board game came out, life has changed a lot, and in creating the sequel we saw an opportunity to align player choices, careers and even the pegs with today’s more inclusive lifestyle. Life is not linear and we have reflected this in the gameplay, so from the mechanics through to the small details, THE GAME OF LIFE 2 is up-to-date and fun to play. We are very proud of what we have created, and we are doubly excited to share the new themes and content in the pipeline for the coming year.”

“Marmalade Game Studio have been our reliable partners on multiple projects now, so we knew they would do a great job creating THE GAME OF LIFE 2, a new game for mobile devices this summer.” Said Hasbro’s [name],[title]. “They’ve done a great job bringing refreshing, contemporary elements to an already beloved game, and we are exceptionally proud of what they have created. THE GAME OF LIFE 2 will be the modern classic that friends and families are enjoying on their mobiles this summer.”

Hasbro (NASDAQ: HAS) is a global play and entertainment company committed to Creating the World’s Best Play Experiences. From toys and games to television, movies, digital gaming and consumer products, Hasbro offers a variety of ways for audiences to experience its iconic brands, including NERF, MY LITTLE PONY, TRANSFORMERS, PLAY-DOH, MONOPOLY, BABY ALIVE, MAGIC: THE GATHERING and POWER RANGERS, as well as premier partner brands. Through its entertainment labels, Allspark Pictures and Allspark Animation, the Company is building its brands globally through great storytelling and content on all screens. Hasbro is committed to making the world a better place for children and their families through corporate social responsibility and philanthropy. Hasbro ranked No.13 on the 2019 100 Best Corporate Citizens list by CR Magazine and has been named one of the World’s Most Ethical Companies® by Ethisphere Institute for the past eight years. Learn more at www.hasbro.com, and follow us on Twitter (@Hasbro) and Instagram (@Hasbro). 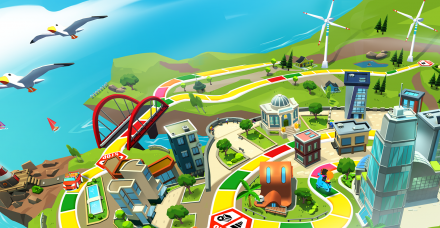