THE GAME OF LIFE 2 offers a contemporary spin on the original’s winning life simulation formula. With more choices and more freedom, the game works seamlessly across a handful of beautiful, fully animated, 3D boards!
This sequel to the famous board game was released in 2020 on mobile devices and PC (via Steam). Since then THE GAME OF LIFE 2 has received two TIGA Game Industry Award nominations, in the Social Game and Heritage in Games categories, along with praise from both critics and fans. By releasing on Nintendo Switch, Marmalade is bringing this iconic life simulation game to Nintendo for the first time in over 13 years!

THE GAME OF LIFE 2 is a contemporary sequel to the classic THE GAME OF LIFE game, released on mobile devices and PC in 2015. With carefully updated gameplay, Marmalade Game Studio has made the journey much more relatable to our modern times.

For the first time players can win the game by earning more than just money. All choices matter here when they can earn points for Knowledge, Happiness or Wealth. Important crossroad moments also appear throughout the game. Players have more than one opportunity to get married, go for that degree, adopt a pet or achieve different goals entirely, the choice is theirs!

With plenty of decisions to make, players can build their own unique life. Whether it’s becoming a Video Blogger sensation with an army of cats, or a Robotics Engineer with three kids and two degrees, all choices count in THE GAME OF LIFE 2.What’s more, when players buy the game on Nintendo Switch they’ll be able to venture through two magical worlds. As well as the classic Eco City board, players can choose to live life in the Fairytale Kingdom and Haunted Hills!

Mike Willis CEO of Marmalade Game Studio, said:“Releasing a game on a new platform is always exciting, and it’s even more exciting when the game in question has enjoyed such praise on mobile and PC. The multiplayer options in THE GAME OF LIFE 2 work cross-platform, so we know people on mobile will be challenging their friends on Nintendo Switch. It’s what our games are all about; bringing people together. We chose to make this sequel more reflective of modern times and that’s certainly resonated with fans. We can’t wait to see what the Nintendo Switch audience makes of it.
Marmalade Game Studio prides itself on connecting players, whether they’re in the same room or hundreds of miles apart. With online and offline options, THE GAME OF LIFE 2 is a safe and easy multiplayer experience, even cross-platform. Players can play together via iOS, Android, PC and now Nintendo Switch!

THE GAME OF LIFE 2 is the latest in Marmalade Game Studio’s roster of high quality adaptations of beloved Hasbro board games for Nintendo Switch, including: CLUE/CLUEDO and BATTLESHIP.

Hasbro’s Richard Cleveland, Vice President of Digital Gaming said:”THE GAME OF LIFE 2 has been an amazing success. Fans of the original love it and it’s finding a whole new audience, which is very exciting. The Switch is a versatile console that allows us to create innovative ways for fans to play with our games. I can’t wait for players to see THE GAME OF LIFE 2 played on both portable and big screens.”

For a limited time, all pre-orders via the Nintendo eShop will include 10% discount and come with an exclusive free Gamer player outfit.
For more information, please contact Paul Watson at paul@gameifyouare.com.About THE GAME OF LIFE

About the game
THE GAME OF LIFE 2 is here on Nintendo Switch! This digital board game is an official, contemporary sequel to the classic THE GAME OF LIFE game. It offers more choices and more freedom every stage of the game on a fully animated and immersive 3D board. You’ve got thousands of meaningful ways to live your life before reaching the finish line.
THE GAME OF LIFE 2 is another one of Marmalade Game Studio’s classic board games for kids and adults alike.
Features

About Hasbro Hasbro (NASDAQ: HAS) is a global play and entertainment company committed to Creating the World’s Best Play and Entertainment Experiences. From toys, games and consumer products to television, movies, digital gaming, live action, music, and virtual reality experiences, Hasbro connects to global audiences by bringing to life great innovations, stories and brands across established and inventive platforms. Hasbro’s iconic brands include NERF, MAGIC: THE GATHERING, MY LITTLE PONY, TRANSFORMERS, PLAY-DOH, MONOPOLY, BABY ALIVE, POWER RANGERS, PEPPA PIG and PJ MASKS, as well as premier partner brands. Through its global entertainment studio, eOne, Hasbro is building its brands globally through great storytelling and content on all screens. Hasbro is committed to making the world a better place for all children and all families through corporate social responsibility and philanthropy. Hasbro ranked among the 2020 100 Best Corporate Citizens by 3BL Media, has been named one of the World’s Most Ethical Companies® by Ethisphere Institute for the past ten years, and one of America’s Most JUST Companies by Forbes and JUST Capital for the past four years. We routinely share important business and brand updates on our Investor Relations website, Newsroom and social channels (@Hasbro on Twitter, Instagram, Facebook and LinkedIn.)

Nintendo Switch is a trademark of Nintendo.

THE GAME OF LIFE 2 Age of Giants world takes a giant step back in time!

Have your say on the future of MONOPOLY!
Next Article 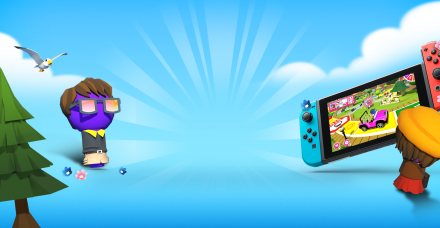