The local multiplayer update releases on Nintendo Switch and Steam

WHO’s the best consulting detective in the room? Find out with CLUEDO’s new local multiplayer mode on Nintendo Switch and Steam! The highly requested mode is part of May’s update, which also includes a new ‘Sherlock’ theme.

CLUEDO is the digital adaptation of the classic murder mystery board game by Hasbro, Inc. (NASDAQ: HAS), where players need to use their deduction skills to discover who murdered Dr Black, with which weapon and in which room.

The option to play together with friends and family on one screen was the most requested feature upon release of the game but was previously not possible due to the need to keep secret clues and notes hidden from other players. Marmalade Game Studio has resolved the local multiplayer limitation by developing a free mobile companion app, which acts as a game controller and clue sheet on which players can make notes in secret.

Michael Willis, CEO of Marmalade Game Studio said: “One of the best parts of playing a board game is having a fun shared experience together with your family or friends. We want to make sure this is also possible in our digital adaptation of CLUEDO and it’s going to be a part of every board game we make in the future.”

The local multiplayer update releases on Nintendo Switch and Steam on May 3rd, 2019. The free companion app, named ‘Cluesheet Companion’ is available on iOS and Android and can be installed on a mobile device via the App Store and Google Play. Players who own the mobile game CLUEDO: the official edition or Clue: the Classic Mystery Game can also use this app to join a local multiplayer game on Nintendo Switch or Steam.

May’s update introduces a new Sherlock theme as well, which adds a brand new board setting and nine new characters to the game, including Sherlock, Dr Watson, and Moriarty. The Sherlock theme is free for season pass holders or can be purchased as an add-on.

London-based Marmalade Game Studio is one of the most successful publishers in the digital board games market. Notable successes include The Game of Life and CLUE/CLUEDO, both highly polished and innovative games that constantly top the charts on the app stores. For more information about Marmalade Game Studio, please visit the website: https://marmaladegamestudio.com/, and follow us on Twitter (@MarmaladeGames) and Facebook (@MarmaladeGameStudio)

Hasbro (NASDAQ: HAS) is a global play and entertainment company committed to Creating the World’s Best Play Experiences. From toys and games to television, movies, digital gaming, and consumer products, Hasbro offers a variety of ways for audiences to experience its iconic brands, including NERF, MY LITTLE PONY, TRANSFORMERS, PLAY-DOH, MONOPOLY, BABY ALIVE, and MAGIC: THE GATHERING, as well as premier partner brands. Through its entertainment labels, Allspark Pictures, and Allspark Animation, the Company is building its brands globally through great storytelling and content on all screens. Hasbro is committed to making the world a better place for children and their families through corporate social responsibility and philanthropy. Hasbro ranked No. 5 on the 2018 100 Best Corporate Citizens list by CR Magazine and has been named one of the World’s Most Ethical Companies® by Ethisphere Institute for the past eight years. Learn more at www.hasbro.com, and follow us on Twitter (@Hasbro) and Instagram (@Hasbro).

How to make notes in CLUE/CLUEDO

It's your shot - BATTLESHIP on Nintendo Switch
Next Article 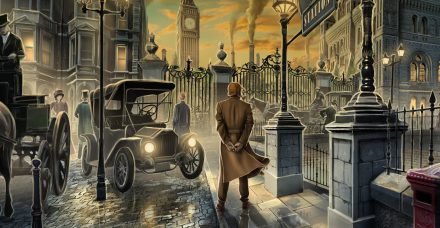 Marmalade Game Studio whisks players away on a wonderful Tropical Mystery, in the tenth theme for CLUE/CLUEDO on iOS, Android,…