SAVE 60% on past favourites in a luxurious brushed copper finish PLUS 41 versions of the classic Monopoly board from around the world!

It’s back by popular demand! After an international vote and an unexpected landslide victory, the Thimble playing token has returned! In celebration, the Vintage Adventurer Edition Bundle brings a selection of classic tokens back into the game.

The bundle includes 6 lost Monopoly tokens in luxurious brushed copper, PLUS 41 versions of the classic Monopoly board from around the world. Buy-up standard properties in South Korea, Brazil, Sweden, India and more. Take your property empire global and play as the Thimble, Wheelbarrow, Boot, Iron, Horse & Rider and Sack of Money!

Download Monopoly now from the App Store and Google Play and SAVE 60% on the Vintage Adventurer Edition!

The Monopoly tokens are a unique and iconic part of the board game. Ever changing, the selection has constantly evolved since the game became a family favourite in the 1930s. As a result the tokens have a history of their own. Some have been retired and brought back. Others were discontinued and lost to the past, becoming rare collector’s items.

One of the original pieces from 1935, the Thimble is the favourite of US Monopoly champion, Richard Marinaccio. After a public vote in 2017, the Thimble was retired, although it seems the majority have changed their minds!

This rare item was the first new token added in over 40 years, after a landmark public event in 1998. Securing an amazing 51% of the vote, and the favourite of 1.5 Million people, it lasted less than 10 years in the game. Choose it now and display your riches from the start!

Introduced in the 1950s, the Horse & Rider was removed quietly and never returned to the game. Well, now it’s back. Saddle-up and prepare to gallop to victory!

Another original from the 1930s edition, the boot remained in the game until 2017 as a symbol of the rewards hard work can bring. Now it’s making a comeback and it’s ready to stamp out the competition!

As most people’s least favourite past time, and the least favourite token, the Iron was at the bottom of the heap in the 2017 vote, with only 8% in favour of keeping it! The favourite piece of Monopoly World Champion, Bjorn Halvard Knappskog, it’s made a return in this Vintage Adventurer Edition Bundle, and it’s ready to iron out the creases in your business plan!

Introduced in the 1950s, the wheelbarrow made its appearance as a symbol of hard work and an essential feature of building sites around the globe. Bottom of the heap in the 1998 vote, it was voted out in 2017. Now it’s back to barrow money into your property empire!

Evoking the Past while Looking Forward to the Future

Other board games hold on to their original player pieces, like the Pegs in The Game of Life, or the iconic Cluedo characters. But the Monopoly tokens are ever-changing. Huge public votes decide which come and go and sometimes a lost favourite returns!

Celebrate the history of these tokens with the Vintage Adventurer Edition Bundle. Play now as the lost favourites of Monopoly past in the digital version of the game!

For the first time ever, The Game of Life 2 is coming to Xbox One and Xbox Series X|S, bringing real-life lessons to millions of young players
Next Article 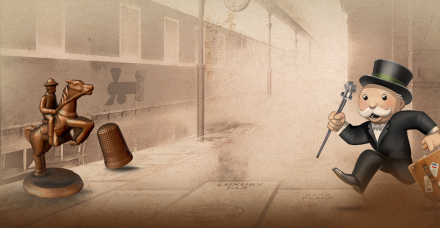